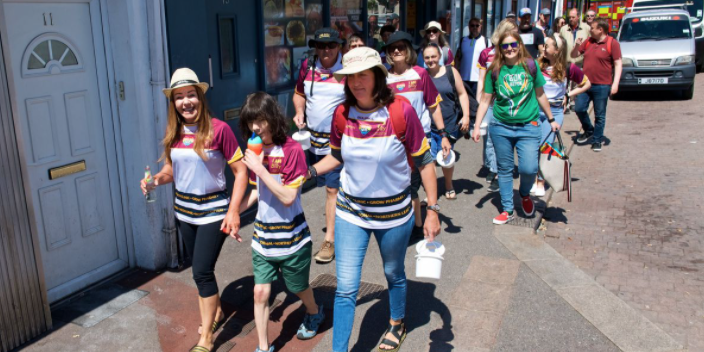 MEDICAL cannabis campaigners Billy and Charlotte Caldwell were joined by patients, politicians and figures in the local growing industry for the Jersey leg of their 1,000-mile walk across the British Isles this weekend.

The pair are trekking from their home in Northern Ireland to Westminster via Liverpool, Southampton and the Channel Islands to raise funds for patients who cannot afford treatment and for research to help doctors become more comfortable in prescribing the drug.

Billy, who is epileptic and autistic, made headlines in 2018 when he suffered a seizure and was taken to hospital in London after his medical cannabis, which he was prescribed in the US, was confiscated at Heathrow.

Then Home Secretary Sajid Javid authorised the release of his medication following lobbying by his doctor and campaign team. Billy’s mother, Charlotte, has since called for greater support for patients who need medical cannabis.

She and Billy are currently completing their 1,000-mile ‘Walk with the Wizard’, so named due to Billy’s love of Harry Potter, and intend to finish in London with a meeting with Health Secretary Matt Hancock.

On Saturday the pair walked from the People’s Park through St Helier and on Sunday they set off from Sir Winston Churchill Park and journeyed along St Brelade’s Bay. They were due to meet Deputy Chief Minister Lyndon Farnham in the Royal Square today.

Ms Caldwell said: ‘It has just been wonderful to meet all of these patients who I’ve been talking to for years on the phone. To see their faces and talk to them in person has been great.

‘It’s been great to come here to Jersey. We’ve got beautiful blue skies for the walk and the town is really nice.’

Jersey resident Martin O’Neill (40), who is a friend of Charlotte’s, said that the drug had helped him control severe spasms he was suffering.

‘I have severe neuropathic pain, which is due to a field mesh implant. I have quite violent spasms within the area of the groin which have taken me to intensive care on quite a lot of occasions,’ he said.

‘After exhausting all on other avenues, I decided to try cannabis. I thought it would never do anything because the pharmaceutical drugs were not controlling it. I was so wrong.’

He added: ‘When you talk to Charlotte and then you meet other patients today it’s humbling. It’s really special. This is for all the patients.’

Healthcare worker Jayne Christie said that medical cannabis helps alleviate the back and stomach pain she suffers from.

‘I got a prescription last year and it’s been amazing – the freedom it brings being able to have the right medication,’ she said.

Deputy Steve Ahier, who attended Saturday’s walk, said that he would like to see more done to get medical cannabis into the hands of people who need it in Jersey.

‘We now have cannabis farms here in Jersey, so I do not believe cost should be prohibitive in any way,’ he said.

Paul North, of the Volteface cannabis reform group, paid tribute to the work of Billy and Charlotte.

‘Billy’s walk is amazingly significant because the issue we have at the moment is there is clearly, with cases like Billy, a real need for us to prescribe cannabis-based medicines for quite a wide range of conditions,’ he said.

‘To get the outcomes that you need you have to be kind, positive and solution-focused. And that’s the way in which Charlotte has conducted herself for years.’

The prescription of cannabis for medical purposes was legalised in Jersey in 2018.