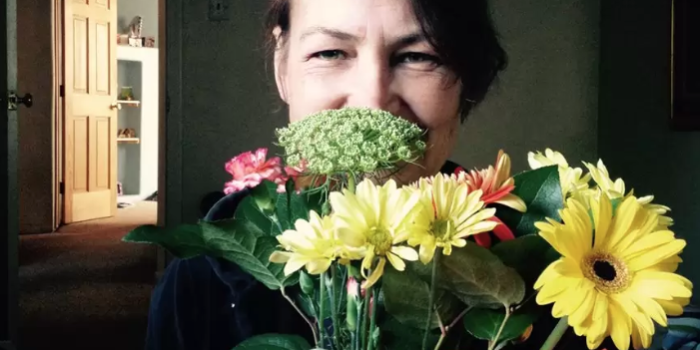 “That toke totally changed my whole life, and the meeting became the last one for me as a research scientist. I left the lab at the Cancer Center in Albuquerque and never went back.”

Swedish speaker, coach, hemp and cannabis advocate, Ann Charlotte Stewart, PhD, lives with her mother on one of the oldest farms in Sweden. Established in 1490, fifteen generations of her family have been raised here. As of 2018, they are now proudly growing hemp.

While cannabis is illegal in Sweden, in 2011 GW Pharmaceuticals’ Sativex was permitted for the treatment of symptoms related to Multiple Sclerosis (MS). To date, of the approximately 1,300 MS patients registered in the socialized medical program, only 50 patients have been prescribed to use the product.

Stewart earned her PhD in Medical Genetics from the University of Uppsala, with her thesis focusing on the genetic organization of papillomaviruses. Her research on the subject led to the vaccine against cervical cancer.

“My first contact with cannabis as a remedy was in Albuquerque, New Mexico, where my family lived from 1994 to 2004,” she shared. “Our neighbors across the street were Rastafarians and they taught me a lot about the Lamb’s Bread and the Holy Cannabis Sacrament. I have to admit, at first, being heavily brain-washed by the Swedish public school system – turning me into a hard-core canna-phobic – I had a big problem with my neighbors smoking weed, but the more we talked and the more I learned, my interest grew.”

“I was in Amsterdam and I had a toke from a joint with my fellow scientific fellows that I trusted,” she explained. “That toke totally changed my whole life, and the meeting became the last one for me as a research scientist. I left the lab at the Cancer Center in Albuquerque and never went back.”

Stewart said that her experience in smoking cannabis was an incredibly intense awakening, with feelings of bliss that lasted two weeks. Some in the cannabis space would say her third eye was opened for the first time.

“I was in a completely new dimension that I had never experienced before,” she continued. “I went to see Mother Meera in Germany right after I left Amsterdam, and Krishna came to me while in a three hour long Darshan with Meera. He stood behind me as a peacock, and lifted his beautiful tail feathers, enveloping me – I could see all those beautiful eyes vibrating. I was forever changed to my very core.”

Suffering with many chronic and incurable diseases, Stewart said her immune system had been weakened from infancy, with a series of allergies, asthma, and infections that grew worse after receiving a series of travel vaccinations as a teenager.

The session with Meera, Stewart said, began her journey of remembering and healing.

“After the vaccinations I began to lose consciousness, fainting without warning,” she explained. “I presented with epilepsy and had my first grand mal seizure in 1987. The doctors found nothing wrong, but now I know they did the wrong tests. My body actually had too many toxins and too little nutrients, and I was severely fatigued, stressed, depressed and anxious – riddled by fear. By the time I was 20 I lost my hair to Alopecia, with no cure.”

Eventually, Stewart said she found an Ayurvedic doctor while in Albuquerque, and began using herbs, Ayurvedic foods and techniques to cleanse her systems.

“After a few weeks I began noticing little baby hairs growing on my head,” she continued. “Dr. Joshi was the first doctor who could actually help me. Since that time I’ve become a Yoga instructor, a meditation teacher, a consciousness coach working with mindfulness, quantum physics and the law of attraction. I basically learned how to master my own psychology and have the pleasure of sharing this knowledge with clients and friends.”

After her son was born, she stepped out of the lab for good, devoting herself to healing, enlightenment, and the advocacy of alternative treatments, including hemp and cannabis.

“We do have a beautiful grassroots movement in Sweden in support of hemp and cannabis, spread via social networks. Politically, it’s still very hard to change things, but we have had a few very courageous people who have stood up for medical cannabis. For some, it has meant the end of their political career, as we still have ingrained canna-phobia among people in politics in our country.”

Currently, cannabis research is being conducted, headed by Dr. Claes Hultling, Founder and Director of the Spinalis Institute in Solna, Stockholm, with a project studying 100 patients with chronic and severe pain. The project will run from six months, with data collected, and Stewart said they are hopeful for positive results that will help change the laws.

With her colleague, Anna Bohlmark, they are in the process of making a documentary on medical cannabis, began in June of 2018, interviewing cannabis industry movers and shakers in four countries this past summer, including Canada, Denmark, Holland, and their home country of Sweden.

“We were in Vancouver when they announced the country would be legal for recreational use,” she added. “We were able to interview Lars Thomassen, owner and director of one of Europe’s largest cannabis farms in Denmark, in partnership with Canadian Canopy – estimated to produce upwards of 20 tons of medical cannabis a year, exporting to Greece.”

The two visited Holland, where they met and interviewed Runus Beindema, Founder and Director of Suver Nuver Foundation, a network of social clubs that educate and distribute medical cannabis by mail to more than 10,000 members, that otherwise wouldn’t get help within the socialized state systems.

“We’ll continue production in Uruguay, Spain, and Israel, where we are excited to interview Dr. Raphael Mechoulam,” she declared. “

While the younger generation is more progressive on the subject, Stewart said the country will have to follow-suit with other countries now educated and enlightened to the many benefits of the plant.

“We have an enormous problem with inflammatory and degenerative disease in our country,” she said. “Pain management is a big issue and most doctors prescribe opioids, with too many dying, unable to receive help. It’s an enormous problem, and I believe cannabis is the answer. The knowledge of the benefits of cannabinoids is everywhere – even on our national television, and can’t be ignored any longer.”