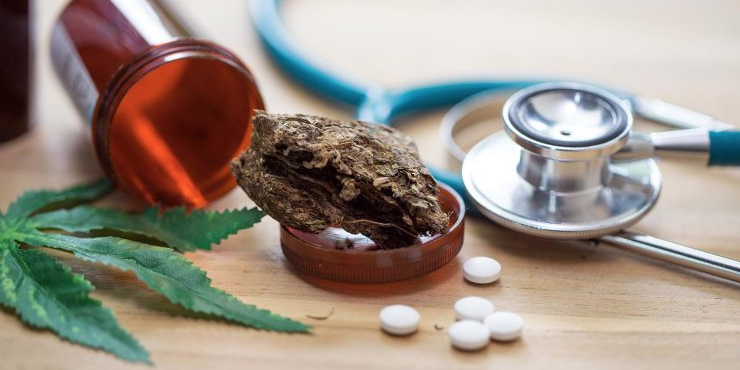 Preliminary research that needs to be confirmed by more studies.

Medical marijuana shows early promise to lessen opioid use and potential abuse, suggests a systematic review of published studies being presented at the ANESTHESIOLOGY® 2019 annual meeting. However, much more rigorous scientific research must be done to determine if there truly are pain relief benefits to medical marijuana that can ease chronic pain and outweigh potential risks.

The analysis focused on seven studies, five of which concluded medical marijuana may be associated with benefits such as: decreased opioid overdose rates, decreased opioid use, improved quality of life and improved pain control.

“Overall the results suggest medical marijuana may provide some benefit in mitigating opioid misuse, but the studies were not randomized controlled trials comparing marijuana to a placebo, which is what we need to determine a true benefit,” said Mario Moric, MS, lead author of the study and a biostatistician at Rush University Medical Center, Chicago. “There are other issues to consider as well, including side effects and the fact that these products often aren’t regulated.”

“Long-term effects of medical marijuana are not known and haven’t been studied yet. Early clinical evidence suggests that marijuana might have detrimental effects on the brain,” said Asokumar Buvanendran, M.D., co-author of the study, chair of the American Society of Anesthesiologists (ASA) Committee on Pain Medicine and vice chair of research at Rush University Medical Center.

The researchers determined the effect of the combined studies was .59, meaning the benefits of medical marijuana were found to be weak to moderate overall, but significant. Anything above 0 is positive and anything below 0 is negative, with 1 or higher demonstrating a strong effect for this type of research.

The various findings from the five studies that showed a positive benefit included a 29% reduction in opioid overdoses in states with medical marijuana and a 44% to 64% reduction in opioid use among chronic pain patients. The two other studies found no evidence of reduced opioid use overall. One of these studies found that pain actually increased for a small subset of patients using marijuana who had more illnesses and were sicker in general. The researchers note that because studies reporting positive findings are more likely to be published than those with negative ones, the results of this new systematic review may be skewed.

Currently, 33 states and Washington, D.C., have legalized medical marijuana, but all set their own regulations, which vary. Known side effects of marijuana can range from sleepiness to liver damage. Also, the lack of oversight and inconsistent regulation means ingredients can differ and may include pesticides and other impurities.

Short-term opioids can be useful for easing pain when managed safely and the risks are minimized, but longer use needs to be weighed for risk vs. benefit. More than 11 million Americans misuse opioids, more than 2 million have an opioid abuse disorder and an estimated 130 people die of an opioid overdose every day, according to the U.S. Department of Health and Human Services. More than 20% of Americans suffer from chronic pain, according to the Centers for Disease Control and Prevention.

“While we await better research on marijuana, pain specialists such as physician anesthesiologists can offer many non-opioid medications and other alternatives to treat chronic pain such as injections, nerve blocks, physical therapy and spinal cord stimulation,” said Dr. Buvanendran.